The Book of Forgiving: The Fourfold Path for Healing Ourselves and Our World

By Archbishop Desmond Tutu and his daughter Mpho Tutu

I’m never going to forgive them for what they have done! I don’t know if I can forgive them? If I forgive them, then they’ll think they can hurt me again. How many times have you heard people use these phrases or have held onto these beliefs? Forgiveness is a decision to let go of resentment and thoughts of revenge. But how do we get there? How do we release ourselves from resentment and grief? 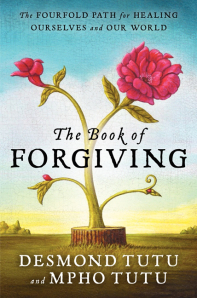 Desmond Tutu has witnessed some of the most horrific crimes people can inflict on others. He lived in a country, which disenfranchised the majority of the population, but somehow he emotionally survived. The Book of Forgiving: The Fourfold Path for Healing Ourselves and Our World written by Archbishop Desmond Tutu and his daughter Mpho Tutu teach people how they can come to forgive while holding onto their dignity.

Together they explain the four step process of forgiveness: Telling the Story, Naming the Hurt, Granting Forgiveness, and Renewing or Releasing the Relationship. Each one of them offers personal stories where they too, have had to face life-changing challenges and they choose to forgive.

In “Telling the Story” they explain how you restore your dignity after you have been harmed and how you start to understand and make meaning of your pain and hurt.

In “Naming the Hurt” they explain how this is part of the healing process where the hurt needs to be voiced and how never naming your pain or talking about tis injury can having lasting effects and emotional scares.

In “Granting Forgiveness” they point out how this is a choice you make in order to free yourself from the pain of hurt and betrayal. They discuss how we are all born from the same human family and each one of us is flawed. But it is much more then just accepting our flaws its also about gong from the role of victim to that of a victor.

The chapter on “Renewing or Releasing the Relationship” discusses the possibility of renewing your relationship with the one who harmed you or releasing yourself from that relationship. We see this in our work when we work with couples, individuals or families after an affair, divorce or betrayal. The decision and choice to renew or release a relationship or friendship is so individual. Only each person can make that choice. How do you make sense of your struggles and move forward from pain to hopefulness?

Then book engages you in a conversation that provides clear examples of how others have struggled with forgiving perpetrators of violence and injustice and crime. It provides you with the language of forgiveness to help you find the words you may need. There is even a chapter on forgiving yourself. Each chapter offers the reader meditations, exercises, websites, journal exercises and prayers to guide the reader along the path to forgiveness. This book is an easy uncomplicated read written in simple, clear and empathetic language for all readers.